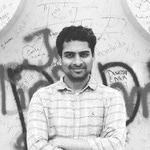 > Brain behind & the founding member of India's first social network Bharatstudent.com (Between 2005 - 2008).

> Scaled up several startup companies over the last decade and built several brands and impact platforms.