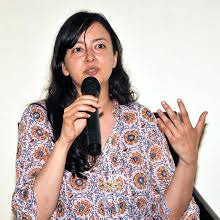 Guneeta Singh Bhalla is founder of The 1947 Partition Archive Previously, she was an experimental condensed matter physicist who completed her tenure as a post-doctoral researcher at the Lawrence Berkeley National Laboratory and the Department of Physics at the University of California at Berkeley. After a 2008 visit to the oral testimony archives at the Hiroshima Peace Memorial she was inspired and began interviewing Partition witnesses in 2009. It was a deeply enriching experience and she wanted to share it with everyone.